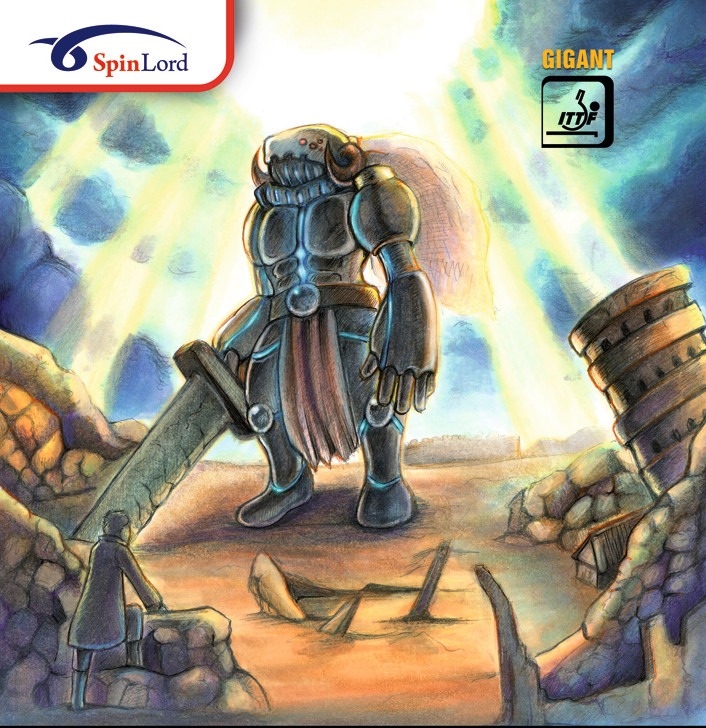 Our SpinLord Gigant is a totally new kind of Anti rubber. The Gigant is extremely slow and very power absorbing, but it is not frictionless and also not similar to classical Antis with friction. That also means it is completely different from our first Anti „Sandwind“.

Many players feel that frictionless Antis are not versatile and controlled enough and common Antis with friction not dangerous at all. For these players we developed the Gigant.

The top-sheet of the Gigant is very hard. The surface of the rubber has not been sanded like classical Antis, and it also has not been treated with chemicals after the production like frictionless Antis. It is glossy (slightly shinny) like normal inverted rubbers. But due to the very special rubber compound the friction of the rubber surface is very low and only slightly higher than that of the "Glantis".

The sponge of the Gigant is a very soft dampening sponge of the newest generation. It reduces the speed of the rubber to a level that can be compared to that of frictionless Antis. But unlike these rubbers the Gigant can be used very good both for blocking at the table and for classical defense away from the table. The ball flight trajectory will always be flat, extremely short and hard to predict. The Gigant is also so slow and controlled that a very precise ball placement is possible.

The Gigant is completely insensitive to incoming spin, but own strokes with this rubber can also be played with some spin. Undercut balls even have enough spin to make it very hard for the opponent to attack with a topspin.

And unlike frictionless Antis, there are no special techniques needed to play all these strokes. Players who have played tacky inverted rubbers before can easily master the Gigant after only a few hours of practice.

How is all this possible?

The secret of the Gigant is that the inverted pimples of Gigant are very long and make the top-sheet a little elastic despite its hardness.

Of course there are also strokes that the Gigant is not suitable for. Specially topspins are almost impossible to play with this rubber, and it is also hard to smash the ball. This makes Gigant ideal for players who attack with their FH and defend with their BH. These players will find it very convenient that the Gigant is still very slow even on fast blades.

The Gigant can be played by players of almost all levels except top-level players. Only high-class players still should prefer a long pimple-out rubber for defending.

Also the weight of the rubber is very low and the quality much better then that of most Antis without friction.