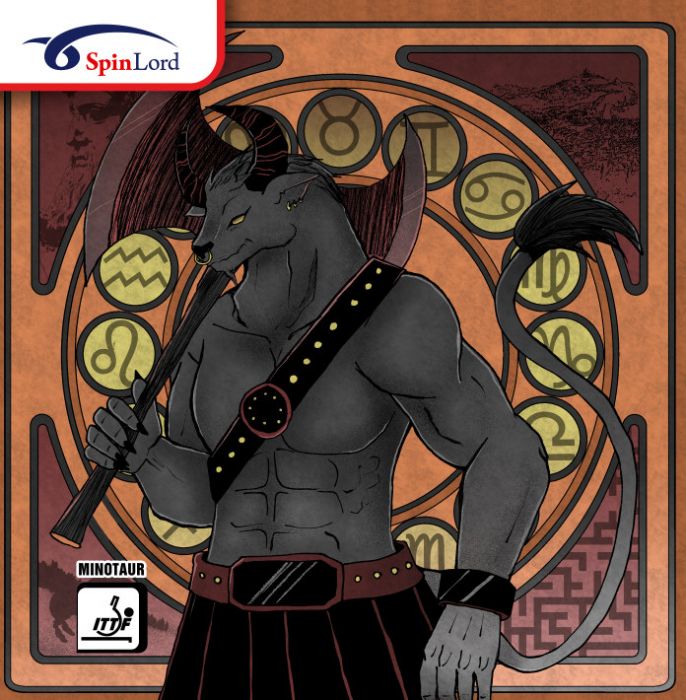 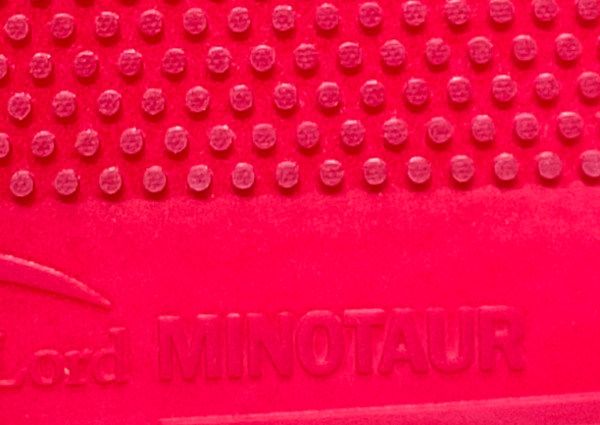 The SpinLord Minotaur is a very unusual, almost experimental pimple-out rubber. Due to its aspect ratio, the ITTF lists this rubber as "long", but it has been made for players who previuosly have played a semi-long rubber and are searching for something new with a higher disruptive effect.

The cylindrical shaped pimples are extremely thin. They are even significantly thinner than the pimples of the most long pimple-out rubbers. And at the same time, they are only slightly shorter!

One would now expect that the pimples wobble very easily, and also break quite quickly. But neither is the case. The pimples are very sturdy and only wobble when hard shots are performed.

Basically, the top sheet of the Minotaur is very fast, hard and also has a slight catapult effect. The pimple tops are ribbed.

This time the sponge is a medium-hard, classic offensive sponge from China without a built-in speed glue effect.

The main strength of the Minotaur are block balls and counter-attacks, but also chopping with this rubber is very effective.

The Minotaur can generate a very high disruptive effect, which is significantly higher than with other medium-length pimples. Often the disruptive effect is even sufficient to win a point through this alone. However, the Minotaur should be used more offensively.

The weaknesses of the Minotaur are clearly topspins (the pimples are too thin for that) and the hard shot with the forehand.

Of course, the enormous disruptive effect comes at the expense of control, but it is still significantly better than with long pimples. In this case, the ball placement is more difficult than with some other pips.

The Minotaur can be played with or without using the wrist. It is also insensitive to incoming rotation, although not nearly as extreme as the SpinLord Gepard.

Overall, the Minotaur can be rated as a controlled offensive rubber. It is not nearly as fast as the Waran, but slightly faster than the Degu.

We think that the Minotaur is particularly suitable as a backhand rubber and is most suitable for players in the lower - middle leagues. If the disruptive effect of other medium-length pimples is not enough, this rubber could be the right choice if long pimples are out of the question.