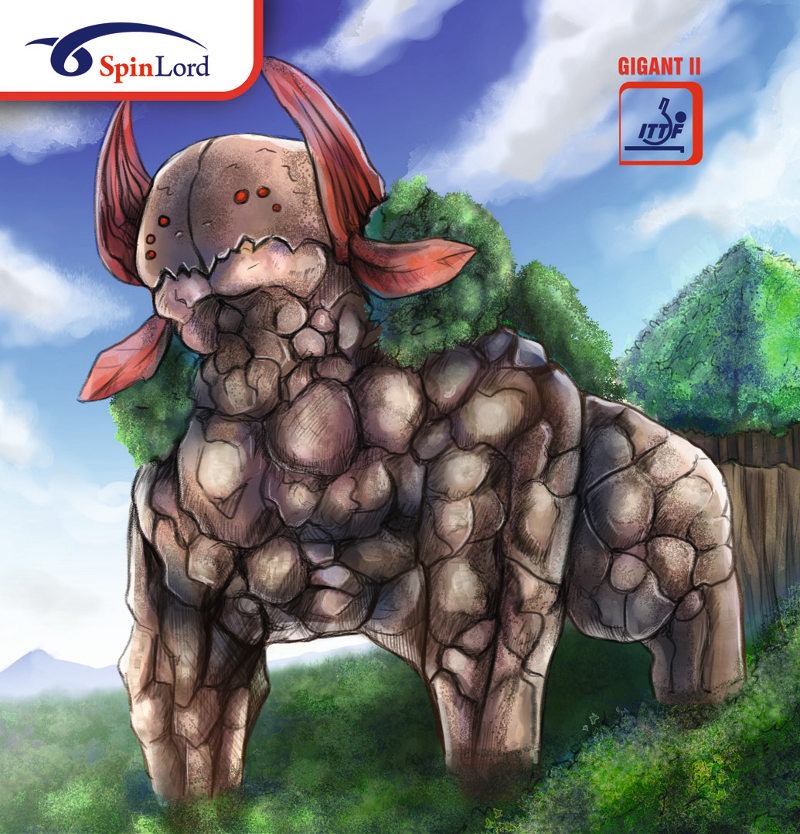 Our Anti SpinLord Gigant has become very popular and many players are very satisfied with it. But we also received some feedback that for some players it is too slow. Indeed, it is one of the slowest rubbers in the world and not all players may be able to adapt to this speed level.

So we decided to create a new version of  the Gigant with a normal sponge instead of a dampening sponge. For this purpose we combined the unchanged top-sheet of the Gigant with the sponge of the SpinLord Marder.

The top-sheet of the Gigant and the Gigant are 100% identical. This means that also the top-sheet of the Gigant II is hard but still a little elastic due to the rather long inverted pimples. The surface of the rubber has not been sanded like classical Antis, and it also has not been treated with chemicals after the production like frictionless Antis. It is glossy (slightly shinny) like normal inverted rubbers. But due to the very special rubber compound the friction of the rubber surface is very low and only slightly higher than that of the "Glantis".

Compared to the Gigant, the Gigant II can create even more spin and is also even more dangerous and versatile. Specially counter-attacks are easier to play and much more effective with the Gigant II. The Gigant II is also suitable for both block balls at the table and for classic undercut defense. Only a topspin cannot be played at all with this rubber.

Especially for the backhand side, the Gigant II is an interesting alternative for players who have previously played with very slow inverted rubbers. However, it cannot replace a long pimple-out rubber or a "Glanti" with regard to the disruptive effect. With the Gigant II you rather will win the games through ball placement, a low own error rate and the often unexpectedly flat and short ball flight curve.

The Gigant 2 is very easy to master and can be used by players of all levels, except by top-level players who most likely will not choose an Anti in general.